The first day of the IEWP Annual Conference provided a comprehensive review of fifty years of HSCT in Europe, starting with the first transplant of an X-linked severe combined immunodeficiency (SCID) patient in Leiden. Pioneering work of immunologist Jon van Rood in the field of tissue typing paved the way for HSCT by determining which donor-recipient combinations would be safe. Han de Koning and Jaak Vossen, pediatricians involved in this first reported European HSCT, were present to listen to several European and North American speakers highlighting important developments in HSCT for inborn errors since these early days. These developments include the progress in early diagnosis by newborn screening, less toxic conditioning regimens, donor selection, long term outcome, improvements in supportive care and graft manipulation. The first day also included a preview to a fascinating new development in the treatment of inborn errors which would be further discussed on Sunday: gene therapy.

The second day provided an overview of developments in HSCT in selected diseases. The morning kicked off with a session on hemophagocytic lymphohistiocytosis (HLH). Several approaches to ensure stable (mixed) donor chimerism while reducing toxicity were presented, including different reduced-intensity conditioning regimens and serotherapy considerations. We expect to hear more about novel developments in the field of HLH in future meetings, such as targeted anti-cytokine therapy and JAK-STAT inhibition. The next topic was hemoglobinopathies. The development of a haplo-identical transplant strategies using post-transplant cyclophosphamide or TCR alpha/beta depletion approaches have proven to be increasingly safe and effective option for patients who do not have a matched donor. Novel developments for the treatment of selected metabolic diseases was next, including but not limited to gene therapy and enzyme replacement therapy combination treatments. After lunch, different experiences with newborn screening for SCID in Europe, Asia and the U.S. were shared. A live survey demonstrated that there is very little consensus on how to protect identified SCID infants from infection pre-transplant. On most issues, such as isolation measures, prophylactic antivirals, antifungals and antibiotics  and timing of immunoglobulin substitution opinions were evenly divided between the offered alternatives. The last sessions before a sunset dinner at the beach was about novel primary immune deficiencies and the (limited) experience in transplanted patients and an overview of current IEWP study proposals. On Sunday morning, the experiences in gene therapy in WAS and SCID were shared, and gene-editing of peripheral T-cells of CD40L-patients with severe infections was discussed as a possible bridge to transplant. Next, selected challenges and novel approaches in the transplantation of patients with inborn errors were presented. The meeting concluded with a transplant complication that is notoriously difficult to diagnose and for which there is a clear lack of evidence to guide therapy: transplant-associated thrombotic microangiopathy (TA-TMA). Several treatment options were reviewed: eculizumab, coversin and defibrotide.

In conclusion, since the first HSCT in Europe fifty years ago a lot has been accomplished, but many challenges and questions remain. Collaborative IEWP studies and novel developments will undoubtedly answer some of these questions – but also raise new questions. Next year will mark the 40th anniversary of HSCT at Great Ormond Street Hospital in London: a perfect occasion to host the next IEWP-meeting. See you next year!

**Department of Paediatrics, University of Zürich 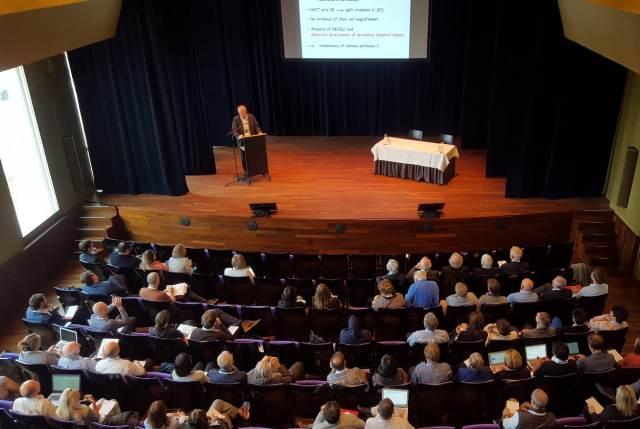