As well as these roles Professor Madrigal is also an Honorary Consultant at the Royal Free London NHS Foundation Trust, and also the Founder and first Scientific Director of the Anthony Nolan Research Institute. He is currently developing clinical trials for the treatment of patients in need of a HSCT and researching the application of cell therapy to treat COVID-19.

He says he was “extremely honoured and overwhelmed on receiving the news that the Board of EBMT had chosen to confer on me this Distinction”. He was particularly moved by the words from the Society that accompanied his nomination, and has allowed us to reproduce them here:

‘Of note, the Society is very proud to acknowledge your many achievements in the advancement of the field of stem cell transplantation. With your visionary ideas and plans as President of EBMT you laid the ground for the rapid development of our Society into a professional organizational structure, which strengthened the role of EBMT as a world-leading organisation in the field of stem cell transplantation and cellular therapies.

This prestigious award has been granted in the past only to a small number of highly regarded individuals, and we are extremely honoured to add your name to this list’.

Prof Madrigal first became involved with EBMT in 1993, after finishing his post-doctoral training at Stanford University in the US and arriving in London to take-up his appointment as Scientific Director of the Anthony Nolan Bone Marrow Trust (with the mission to establish an Academic and Research Program at the Charity).

He worked as secretary of the EBMT Immunology Working Party, working first with chair Professor Jon J. van Rood and later his successor Professor Eliane Gluckman. During that time, they created the EUROCORD project and obtained three consecutive EU grants to support this project (EUROCORD I , II and III). In 2002, Professor Madrigal himself became chair of this group. He also Chaired the EBMT/WMDA Subcommittee, and led and Chaired the prestigious EU-FP6 grant ‘AlloStem’ with a grant of 8M euros that involved over 29 partners from 19 countries (mostly EBMT members).

In March 2009 during the EBMT Annual Meeting in Gothenburg, he was voted (by an overwhelming majority), as President-Elect and in 2010 became President at the Annual Meeting in Vienna and presided over annual meetings held in Paris (2011), Geneva (2012), London (2013) and finally in Milan (2014). During that time, he also Co-Chaired the ASBMT/EBMT Subcommittee.

He concludes: “I am very proud and honoured in the knowledge that I have contributed over so many years to the EBMT’s Mission to focus on innovation, research and the advancement of cellular and stem cell-based therapies to save and improve the lives of patients with blood-related disorders.” 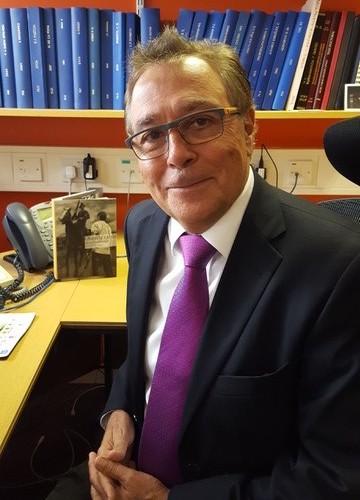