September 2022 Clinical Case of the Month

Two potential HLA-haploidentical family donors (haplo-donors) are available; both are sons matched for ABO blood group and cytomegalovirus (CMV) serology. The recipient does not have donor-specific antibodies (DSA) against the mismatched HLA in either of the two donors.

Which of the following statements is correct?

Haplo-donors share by genetic inheritance one of their two HLA-A, -B, -C, -DRB1, -DQB1, -DPB1 haplotypes with the patient, while the other haplotype is unshared. Therefore, they are commonly mismatched with the patient for 6 out of 12 HLA alleles, although this number can vary (Figure). Genetic recombination, occurring with a frequency of up to 1% if patient and donor are not related by direct descent1, can lead to the presence of mismatches also on the shared haplotype. Both candidate haplo-donors for our patient are sons, obviating the necessity to exclude recombination, which is however recommended for all haplo-donors other than mother, father, son or daughter.

Incidental sharing of alleles on the unshared haplotype, or homozygosity for individual loci, lead to less than 6 HLA mismatches in haploidentical pairs (Figure). Donor 1 has 5 mismatches with our patient, while donor 2 has 4. However, in haplo-HCT under graft-versus-host disease (GVHD) prophylaxis by PTCy, the number of HLA mismatches on the unshared haplotype was not predictive of GVHD or survival2. Rather, defined locus-specific characteristics of HLA mismatches informed survival (Figure), which was improved by B-leader matches3, DRB1 mismatches in graft-versus-host (GVH) direction, and nonpermissive DPB1 T-cell epitope (TCE) mismatches4. For our patient, all three favorable characteristics are present in donor 1 but not in donor 2, resulting in 3-year survival probabilities of 0.78 and 0.57, respectively, for this patient (http://haplodonorselector.b12x.org/v1.0/). Biologically, the favorable impact of B-leader matches and HLA class II mismatches might be explained by NK-5 and T-cell6 mediated alloreactivity, respectively, in the PTCy setting which appears to dampen the immunogenicity of HLA alloantigens7,8.

HLA mismatches can also be recognized by DSA, which can interfere with engraftment9. Therefore, all patients scheduled for haplo-HCT should be tested for DSA, and haplo-donors carrying DSA targets should be avoided. In our patient, no DSA were detected against either of the two candidate donors.

In summary, both donors are equivalent for non-HLA factors (ABO, CMV), absence of DSA, and presence of an HLA-C mismatch, which has been associated with increased chronic GVHD2. However, they differ for the number and locus-specific characteristics of HLA mismatches. Answer C is therefore incorrect. Despite the lower number of HLA mismatches for donor 2, better locus-specific characteristics of the HLA mismatches determine better survival probabilities for donor 1. 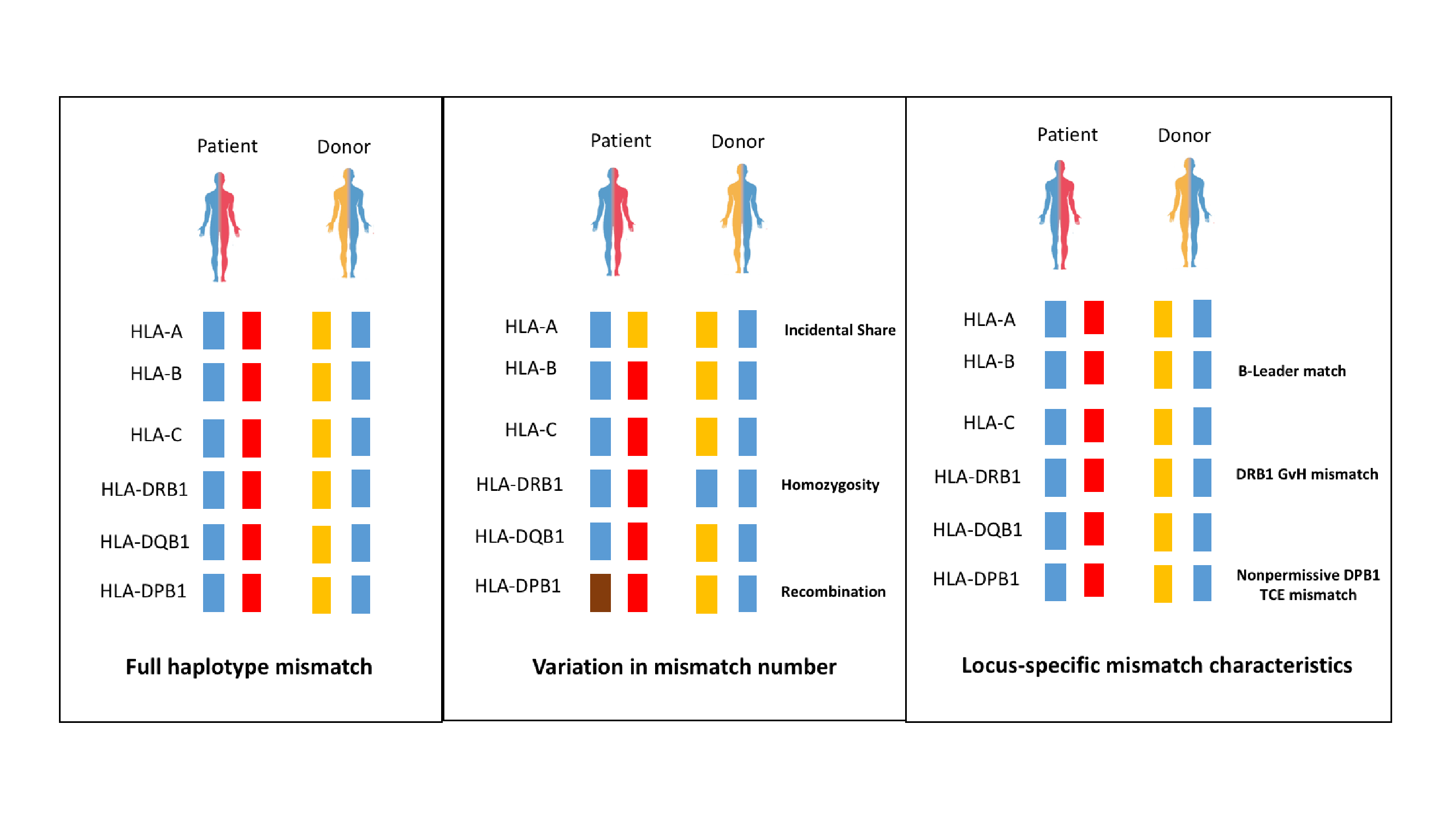 Figure legend: Left panel: patients and their haploidentical relatives share one full HLA haplotype by inheritance (blue), while the other haplotype is unshared (red and yellow), leading most commonly to 6 mismatched HLA alleles. Middle panel: Variation in the number of HLA mismatches can occur by incidental sharing of the allele of a given locus (here HLA-A) on the unshared haplotype between patient and donor, homozygosity at a given locus (here HLA-DRB1 of the donor), or, in donors not of direct descent, genetic recombination at a given locus (here HLA-DPB1). Note that in the latter case, all 4 alleles can be mismatched. Incidental sharing, homozygosity or recombination shown here in exemplary form for individual HLA loci might affect any of the 6 loci in the patient and/or the donor. Right panel: In haplo-HCT under PTCy, HLA mismatches with favorable locus-specific characteristics were identified2. These include match for the threonine/methionine dimorphism at position -21 of HLA-B (B-leader match)3, HLA-DRB1 mismatch in GVH direction (patient carrying a DRB1 allele not present in the donor, i.e. at least the patient heterozygous at DRB1, as in the examples in the right and middle panel), and non-permissive HLA-DPB1 TCE mismatch (TCE group disparity for DPB1)4. Predictions of survival probabilities based on these three favorable HLA mismatch characteristics and other relevant non-HLA parameters, can be obtained via the free online webtool at http://haplodonorselector.b12x.org/v1.0/, which however does not consider the presence of absence of DSA2.

Future Clinical Case of the Month

If you have a suggestion for future clinical case to feature, please contact Nicolaus Kröger.